1. To prevent the loss of the ability to grow, certify, and sell organic crops due to the release of genetically engineered organisms (commonly known as GMO’s) into the environment and the resulting contamination this release causes.

2. To pursue a strategy to ensure all existing genetically engineered organisms causing health risks to the public and/or economic harm to organic growers are ultimately removed from the environment by those responsible for their release

3. To halt the release of genetically engineered crops into the environment by means of advocacy and court injunctions or other legal instruments satisfactory to the long-term interests of certified organic farmers and the consumers of organic food.

4. To actively build a broad alliance of individuals and organizations that support our initiatives, our goals, and our agenda; and to maintain and promote public awareness of our achievements and goals.

5. To engage people willing to help; to facilitate and co-ordinate their efforts, and to set up a liaison between them and the OAPF Committee to ensure their talents are best put to use, and that the integrity of our position and message are respected.

6. To proceed with the knowledge that OAPF initiatives have the potential to raise general public awareness on issues crucial to the wellbeing of organic farmers, the public and the environment.

8. To raise money for these actions, as well as for the expenses of administration and fundraising.

In October 2001, SOD (now SaskOrganics) launched the Organic Agriculture Protection Fund (SOD OAPF) to pay the expenses for the Class Action lawsuit on behalf of all certified organic grain farmers in Saskatchewan against Monsanto and Aventis, which was seeking compensation for damages caused by their genetically engineered (GE or genetically modified) canola and to get an injunction to prevent Monsanto from introducing GE wheat in Saskatchewan. This was the beginning of many other important actions taken by the Committee and their dedicated and passionate members over the years. We encourage you to read a complete history of the OAPF’s work by clicking here.

WHERE WE ARE TODAY

The CFIA has invited submissions in response to their proposal to exempt many gene-edited (also called genome edited) genetically engineered seeds from government ovesrsight (regulation). The CFIA has posted a consultation document and an online questionnaire with a deadline of September 16, 2021.
CBAN has put together a helpful guide with background information and tips for completing the questionnaire. Read the guide here. 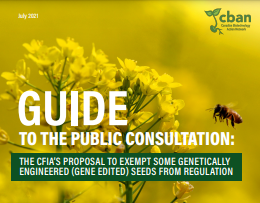 How to Submit Comments

Click here to complete the questionnaire online.  The CFIA will also accept your answers in an emailed document. Please email your comments to cfia.pbo-pbo.acia@canada.ca  and consider copying CBAN (info@cban.ca) and SaskOrganics admin@saskorganic.com.

On a more celebratory note, the OAPF is celebrating its 20th anniversary in 2021! In October 2001, SOD (now SaskOrganics) launched the Organic Agriculture Protection Fund (SOD OAPF) to pay the expenses for the Class Action lawsuit on behalf of all certified organic grain farmers in Saskatchewan against Monsanto and Aventis, which was seeking compensation for damages caused by their genetically engineered (GE or genetically modified) canola and to get an injunction to prevent Monsanto from introducing GE wheat in Saskatchewan. This was the beginning of many other important actions taken by the Committee and our dedicated and passionate members over the years. You can read a complete history of the OAPF’s work by clicking here.

The OAPF continues raising awareness about GM alfalfa releases, as well as the problem of contamination from GM crops. We continue to support the important work being done by the Canadian Biotechnology Action Network, and our two groups frequently coordinate efforts to build a stronger movement. “The OAPF is an important voice for organic farmers on GM issues”, says Lucy Sharratt, Coordinator of the Canadian Biotechnology Action Network (CBAN).

Although GM alfalfa has not yet been marketed in Western Canada, Forage Genetics has reported that 2000 acres of GM alfalfa were grown in Quebec in 2017 and more than 8000 acres in Ontario. (1) The OAPF continues to raise public awareness on this important issue.

On June 14, the CFIA announced an incident of unapproved GM wheat in Alberta. Several GM wheat plants were found growing beside a rural road, and neither the Canadian government nor Monsanto were able to explain how they got there. No GM wheat has ever been approved for production or consumption anywhere in the world, including Canada. The GM trait found growing in Alberta was field tested by Monsanto in Alberta almost 20 years ago. This incident highlights the unpredictable and uncontainable nature of GM crops.

The OAPF has worked with the Canadian Biotechnology Action Network to produce a report on GM Contamination, which will be a key tool in our effort to build public awareness on this important issue. The report called “GM Contamination in Canada: The failure to contain living modified organisms – Incidents and impacts” will be promoted nationally and is available here  www.cban.ca.

The report highlights the environmental and economic consequences, including the cost to Canadian farmers, of escape incidents with GM Canola, GM Flax, GM Wheat, and GM Pigs. The report concludes that co-existence of GM and non-GM crops is not possible and that “the only way to prevent contamination from certain GMOs is to stop their release”.[1] The report is a key tool in our effort to build public awareness and educate decision-makers.

Gene Editing 101 – the science and its consequences for organic farmers
There is a lot of excitement in research communities and the media about using gene editing for “plant breeding”. The techniques are being widely described as precise and, in some cases, as non-GMO, neither is correct. To help producers better understand the science and its consequences, the Canadian Biotechnology Action Network (CBAN) published a new report: “Genome Editing in Food and Farming: Risks and Unexpected Consequences”, as well as a factsheet, “Introduction-Genome Editing in Food & Farming”.

The report provides vital information about the new genetic engineering techniques of “gene editing” or genome editing and the risks they pose. The CBAN report is very timely.  It was published just as Health Canada announced its intention to change how it assesses the risks of GMOs, and as the biotech industry’s PR machine speculates about a future for organics that includes gene-edited crops and animals.

Organic producers’ participation in this discussion is  essential.  SaskOrganics’ Organic Agriculture Protection Fund, in collaboration with CBAN, will be providing regular updates on this issue.  To get the latest news and updates, sign up for our newsletter!

The OAPF supports the scientists who call for gene editing technologies to be strictly regulated.
The work we are doing in cooperation with CBAN to research and raise awareness about the implications of gene
editing is more and more important. The biotech lobby has started using the climate crisis as a way to try to gain
public acceptance and keep governments from regulating the technology – they are now making claims that gene
editing can create new climate-friendly crops. The biotech lobby is spending millions of dollars on public relations strategies designed to get people to doubt themselves and believe the corporations instead. The critical research and awareness-raising work we support is an important way to undermine the biotech companies’ PR strategy and instead create the political will for our government to make the right regulatory decisions for our farms and our food.

Public response to our efforts to stop GM alfalfa shows clearly that the battle against GMOs in our food supply continues and can still be won. The OAPF is advocating on behalf of organic farmers, consumers of organic food and other concerned citizens, to keep GMOs out of our farms and out of the food supply.

The OAPF is currently comprised of the following members:

In order to continue to do the work we do, we rely on the generous support of our supporters. The funds collected are contributing to the work of CBAN and their creation of reports, public awareness, and political lobbying. We will continue to support this and other important efforts with your generous donations.
Donations can be accepted by:

** SaskOrganics does not have charitable status. The OAPF is a committee of SaskOrganics, therefore, donations are not eligible for a tax receipt. If you wish to claim your donation as a business expense please obtain advice from a tax professional. We thank you for your support.